I can totally do this.. can’t I? First day as a stay-home dad.

These were the words of reassurance I said to my wife as she lingered at the front door on a cold January morning, the day her maternity leave ended. Fronting-up with faux bravado and a confidence I didn’t really have, as our six-month-old daughter Amelia smiled bemusedly at us, blissfully unaware that her world was about to change drastically.

This was D-day, Dada-day, the beginning of a grand adventure – Mama goes back to work and now it’s stay-at-home-Dada time. Despite my assurances to my justifiably trepidatious spouse, I had little idea of what I was taking on and how I would manage – if I would manage at all, or instead be reduced to a trembling wreck by the demands of caring for an infant. But how hard could it be, right? Um, pretty damn hard, it turns out!

So, furnished with more emergency contact details than a small hospital, a startlingly large amount of pre-pumped breastmilk, and the mindless optimism of someone who really doesn’t know what they’ve let themselves in for, the challenge began. And I, obliviously confident, went like Shackleton to face the unknown.

To this day I have my suspicions that my in-laws might well have been parked just around the corner – engine idling, primed and ready to rappel through my window and rescue their precious bloodline from the overtired, cack-handed buffoon who was masquerading as a grown-up.

It was here that I stumbled upon the gelatinous nature of time when alone with a baby. All the advice I had been given or  read had emphasised the importance of schedule – for everyone’s benefit. But in those early days I often found that an hour and a half had often passed unnoticed, and all I could remember doing was staring at this tiny, beautiful person and whispering “I really don’t know what I’m doing, sorry.” Or I might turn my bleary eyes to my watch in expectation of Mama’s return, only to realise that the exact duration of entertainment provided by the bell-inside-a-ball-inside-another-ball was a measly forty-eight seconds. 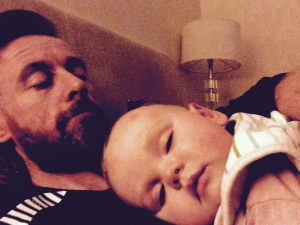 Drop by at 2pm on that first day, and you’ll find me incapacitated. Not by exhaustion, or even despair, but by fourteen pounds of bald cuteness. I’m pinned down, with Mimi happily napping on my chest and I, having quite forgotten to feed myself too, am terrified that my rumbling stomach will disturb her contented slumber.
Finding myself like this was the first note I made in preparation for this blog, and you might also read it as a fitting analogy for parenthood – our own needs and wants, our ambitions and desires, are superseded by another’s. And do we mind? Not one little bit. A hunger pang fades into insignificance when you know that this tiny person you’ve made is fed, safe, and warm. I may have been a total rookie, but I could at least do the basics right.
Share on FacebookShare on TwitterShare on Google+